Gurudwara Sikh Sangat (Gurdwara or Sikh Temple)
4.7
Based on 72 reviews

SIMON SHABBAN
10:26 03 Dec 19
ALSO 1 OF THE DIVERSIFIED COMMUNITY BY VIRTUES OF 5TH LARGEST RELIGION AS ITS ESTABLISHED BY GURU NANAK ABOUT 550YEARS AGO NAMED ( THE SIKHISM) CONCEPTS INCLUDE ALL HUMANS R EQUALLY CREATED BY SACRED & HOLY UNION'S LORD OF THE ALL LORDS 4 LEVEL PLAINS FIELD'S SERVICES & AFFILIATES 4 AFFECTIONS WHEN IN NEEDS OF BASIC FOODS & WATER 2 REMAINS ALIVE & WELLNESS AAMMEEN TEH WAHEGURU JI KA KHALSA TEH WAHEGURU JI KI FATEH

naveen kongara
23:37 24 Feb 19
Heaven of a peace & tranquility. The atmosphere of the Gurdwara let's guests to feel totally at home. Great food made & served with love. I had the pleasure of visiting Gurdwara for the first time today. Thank you.

Roop Sidhu
06:22 16 Jan 19
I would like to recommend the Bebejis And Young LADIES! who have better common sense to talk OUTSIDE in the LANGAR HALL. I didn’t come the Gurudwara Sahib to listen to your dramas. Im trying to listen to The Bhai Sahib Kirtan. The Auntie next to me was talking to another Auntie about how rotis she has to make because she has guest visiting her. I told her to stop talking so I can listen to The Bhai Sahib Kirtan. Then AGAIN ANOTHER Auntie started talking! WTF REALLY!!! 😡 THEN AGAIN, I had to tell her to stop talking. But instead of being quiet, she started talking AGAIN!! Even after i told her to be quiet. So disrespectful! Please if can OR if you care enough post a sign outside before entering NO SOCIALIZING INSIDE. The Bhai’s Kirtan was Awesome!!! I felted Really touched by their voice! Thank you!!

Sunil Tandon
22:29 06 Jan 19
Sat shri akal..who am I to write a review on religious places like temples and gurudwaras.. i am so grateful to my beloved waheguruji for everything in life. A very beautifully planned out Gurudwara with huge prayer hall, langar hall, very clean restrooms and shoe stand with ample parking space. Positive vibes everywhere in and out.. feeling so peaceful and satisfied.. wahe guru..

Harry Brar
21:12 23 Dec 18
I would recommend this specific place of prayer to people of all religions. One time would be more than enough to convince you to make this the place you spend every Sunday at. The people are like none you've ever met before. After sitting through prayer, which is also translated in English, a sense of enlightenment passes through you and you begun to self reflect and appreciate.

Anita Kharbanda
13:29 09 Sep 18
This is a beautiful and peaceful gurdwara, with some of the kindest people you will ever meet. The website and its admin are great, and responsive to questions. We will always be going here with our children.

Gurvinder Singh
00:48 29 Apr 18
Absolutely stunning and welcoming. Feeling of inner peace enters one's mind upon entering. Open to everyone. Come and engage with your Sikh neighbors!

Rosie Saund
20:05 28 Apr 18
Simply a WONDERFUL place to go. Love to DARSHAN of our guru sahib and guru's sangat. Very peaceful and beautiful kirtan by bhai sahib. Thank to y'all for providing such an awsome place. :-)
Next Reviews

After all that work, the 21-year-old Sugar Land resident’s swearing in as one of the newest members of the Harris County Precinct 1 Constable’s Office took less than a minute. The move made him the first Sikh deputy constable in Harris County and represented an important step forward in religious inclusion, local Sikhs said. Sikhism is a monotheistic religion that originated in what is now India. Practicing Sikhs wear a turban and five articles of faith: uncut hair, a wooden comb, an iron bracelet, an iro

Source: He didn’t want to give up his religion to serve. Now he’s Houston’s first Sikh deputy constable. – HoustonChronicle.com 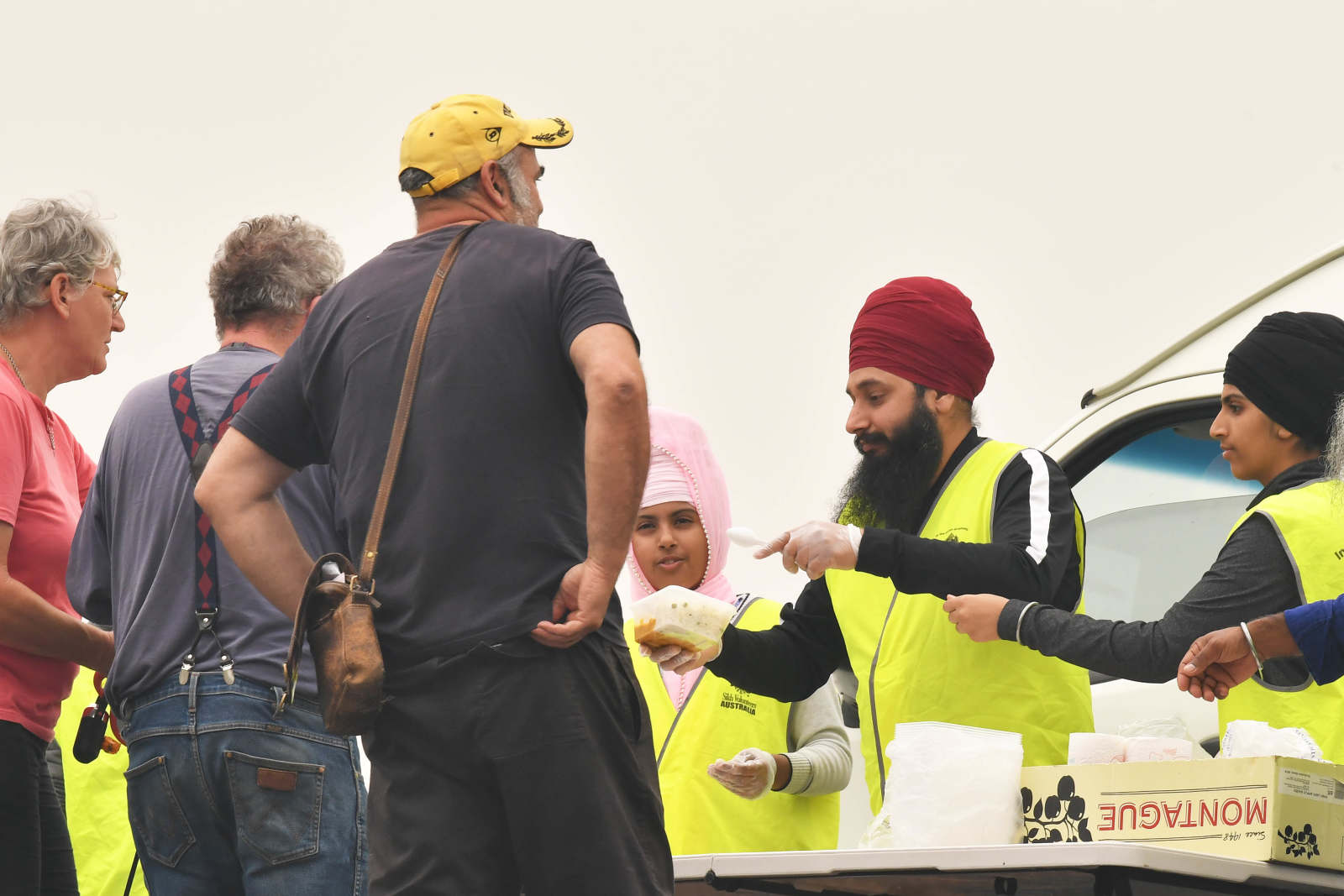 Sikh Volunteers Australia was founded by the burgeoning Sikh community in Melbourne’s south east about six years ago. It established a free food service in 2017 and now regularly helps feed homeless people in the municipalities of Casey and Frankston. Early this year it extended its reach to help feed those affected by bushfires at Bunyip near Pakenham. The group’s work is driven by the Sikh belief in people caring for one another says Mr Singh. Since Monday, and under the watchful eye of head chef

Source: Thanks dhal: Sikh group to the rescue with hundreds of free curries

Karanbir Singh, who helped organize the Sikh Center of San Francisco Bay Area’s outreach during fires in Santa Rosa two years ago, says that the community’s response is a natural outgrowing of its scripture. “We follow the teachings of Guru Nanak [the founder of Sikhism], and one of them is to share with other people and to help them,” he says. “We try to help out anybody who comes here; day or night we provide them free food or lodging.” Though the Center is not equipped to provide housing for long-term st

With the Irwindale-based Phoenix Decorating Co., Singh and 1,400 volunteers were able to bring to life a man who exemplified what the world should be, she said, “putting humanity above affiliations and differences.”The float shows Ji pouring water, surrounded by 69,000 live roses and 16 real-life children. The presence of children from different backgrounds was important to showcase, Singh said, because they are the future of the world.

Devgan said the daily programs run through the Sikh Society of Manitoba provide flexibility so people have more options of when they can go to worship. Its place of worship, or gurdwara, is located on Mollard Road near the northern outskirts of Winnipeg, where the society operates a school with dedicated volunteers who teach youth about the faith, language and more. “It’s something that’s operated at this society — kind of on-and-off over the last several decades — but over the last 10 years, we’ve

At the ceremony earlier this month, the 20-year-old made history by becoming Hong Kong’s first female Sikh prison officer wearing a turban, in a Correctional Services Department (CSD) which has more than 6,500 officers but only 46 who are not Chinese. To Kaur, an Indian Hongkonger and one of the city’s approximately 12,000 Sikhs, the religious garment has always been at the heart of her identity.

These stores would be run on the cooperative model and would be managed, operated, administered and run by 1984 anti-Sikh violence survivors and their family members. All the profit earned from these stores would be utilised for welfare, advancement and development of the 1984 anti-Sikh riot victims’ families to ensure dignified livelihood for them, Sirsa was quoted as saying in a press release.He said first such department store would be opened within the premises of historic Gurdwara Bangla Sahib near C

Over “12.9 million children in America do not know where their next meal is coming from. And something needs to be done about it,” he thought.So Kakar bought an old FedEx truck, painted it orange and began operating his Seva Truck. A unique DC based organization that sends meals to local communities in need including schools and social work organizations.Kakar works on the tenets of his faith – Sikhism and on the teachings of Guru Nanakji, founder of the the Sikh faith who believed in feeding the ne

This trust, established in such a short space of time, is evident in the series of images Ang has produced. The family sit or stand together, clearly completely at ease, either when stroking one another’s cheek, posed by Ang in constructed set-ups that recall stills from the Star Wars films, or in candid moments of laughter. The photographer makes use of a rich, textured palette: Updesh’s turban as a flash of blue amongst a mostly white frame, light spilling through lace curtains, the glow of a light sabre

Amritsar (Punjab), Nov 30 (ANI): Bollywood actor Aamir Khan on November 30 visited the holiest Gurdwara and the one of most important pilgrimage sites of Sikhism the Golden Temple in Punjab’s Amritsar.He took the blessing at the Gurdwara offered prayers. Aamir will soon be seeing performing a Sikh character in his upcoming movie ‘Laal Singh Chaddha.’ This is Aamir’s third visit to the holy Gurdwara.While talking about ‘Laal Singh Chaddha,’ the ‘PK’ actor said that he is trying to make a nice movie which will be appreciated by the viewers. ‘Lal Singh Chaddha’ is an adaptation of Hollywood movie ‘Forrest Gump.’The Golden Temple or Sri Harmandir Sahib is not only a central religious place of the Sikhs, but also a symbol of human brotherhood and equality. The gurdwara teaches the lesson of egalitarianism and humility.